The software testing community is abuzz with talk about Cypress and Selenium.

While Selenium has been around for years, Cypress has grown since inception.

This has left the testing community wondering whether Cypress is a better alternative to Selenium.

Drawing a comparison between the top contenders on the list of testing tools is also important.

So, here’s an article that talks about Cypress and Selenium in detail.

You’ll learn about the pros and cons of implementing them and how leveraging either one will help you with automation testing.

Cypress is one of the fastest growing cross-browser, JavaScript-based front-end test automation frameworks.

It is an MIT-licensed open-source project built for the modern web.

It runs in the browser, enabling asynchronous testing. Developing quickly, Cypress is backed by a strong community and a commercial enterprise.

This tends to close the most concerning gaps in the cross-browser testing space.

Cypress has a set of capabilities that make the automation framework easy-to-use for development and QA teams. 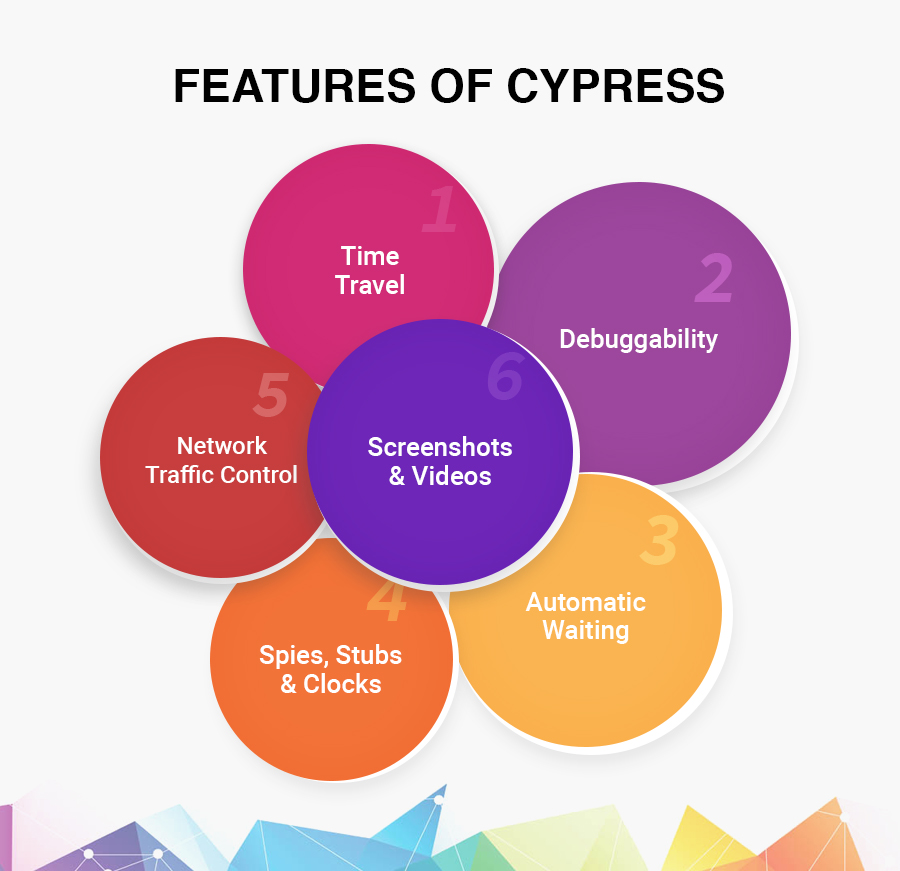 Cypress takes snapshots as tests are run. Hovering over the commands in the ‘Command Log’ helps you understand the sequence of events at every step.

If your tests are failing, you can debug directly using developer tools. Readable errors and stack traces enable lightning-fast debugging.

Cypress automatically waits for commands and assertions before proceeding forward. You don’t need to add waits to your tests.

You can verify and control the behavior of functions, timers, and server responses.

Cypress allows you to control, stub, and test edge cases without including your server.

The automation testing solution enables you to take screenshots on failure. It also records videos on the entire test suite running on the command-line interface (CLI).

Selenium is an open-source browser automation framework. It provides tools and APIs to help automate user interactions on HTML and JavaScript applications.

Selenium is made up of the following four components:

This is one of the reasons why it has been a top-choice for testers for over a decade now.

Ever since Selenium 4 was introduced, it has been gaining traction for its features and functionalities. 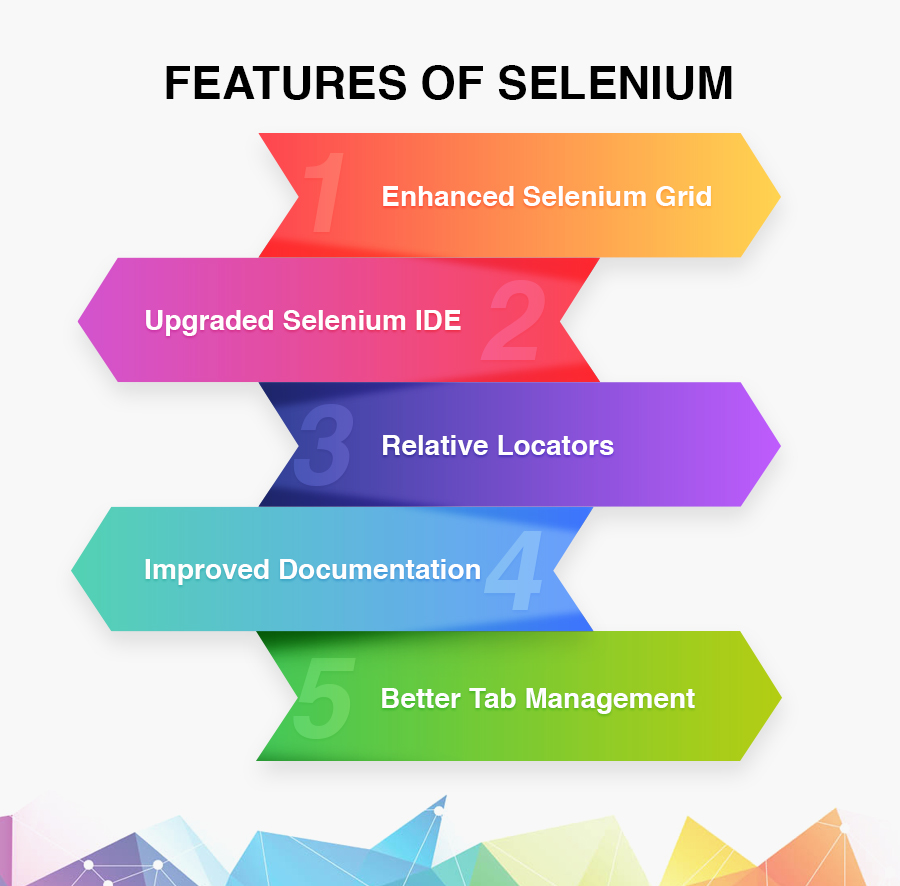 The new Selenium Grid has Docker support. With this enhanced version, developers and QA testers don’t need to set up heavy virtual machines. They can deploy the grid on Kubernetes for better scaling. The Selenium Grid has a user-friendly GUI. Also, it doesn’t need you to set up hubs and nodes separately.

Earlier Selenium IDE was available as a Firefox add-on only. In Selenium 4, it has been revived and is now available on browsers such as Chrome, Firefox, and Microsoft Store. It comes with a new and improved GUI for intuitive user experience. Also, the SIDE (Selenium IDE runner) tool allows QA to run side projects on a node.js platform.

The documentation section comes with improved UI for navigating to a specific section. Developers can find information relevant to a specific tool and language binding.

In test automation, QA may have to open specific links to perform an action. This requires them to create a new driver object. Selenium 4 comes with a new API called ‘newWindow’, which helps users create and switch to a new tab without creating a new WebDriver object. 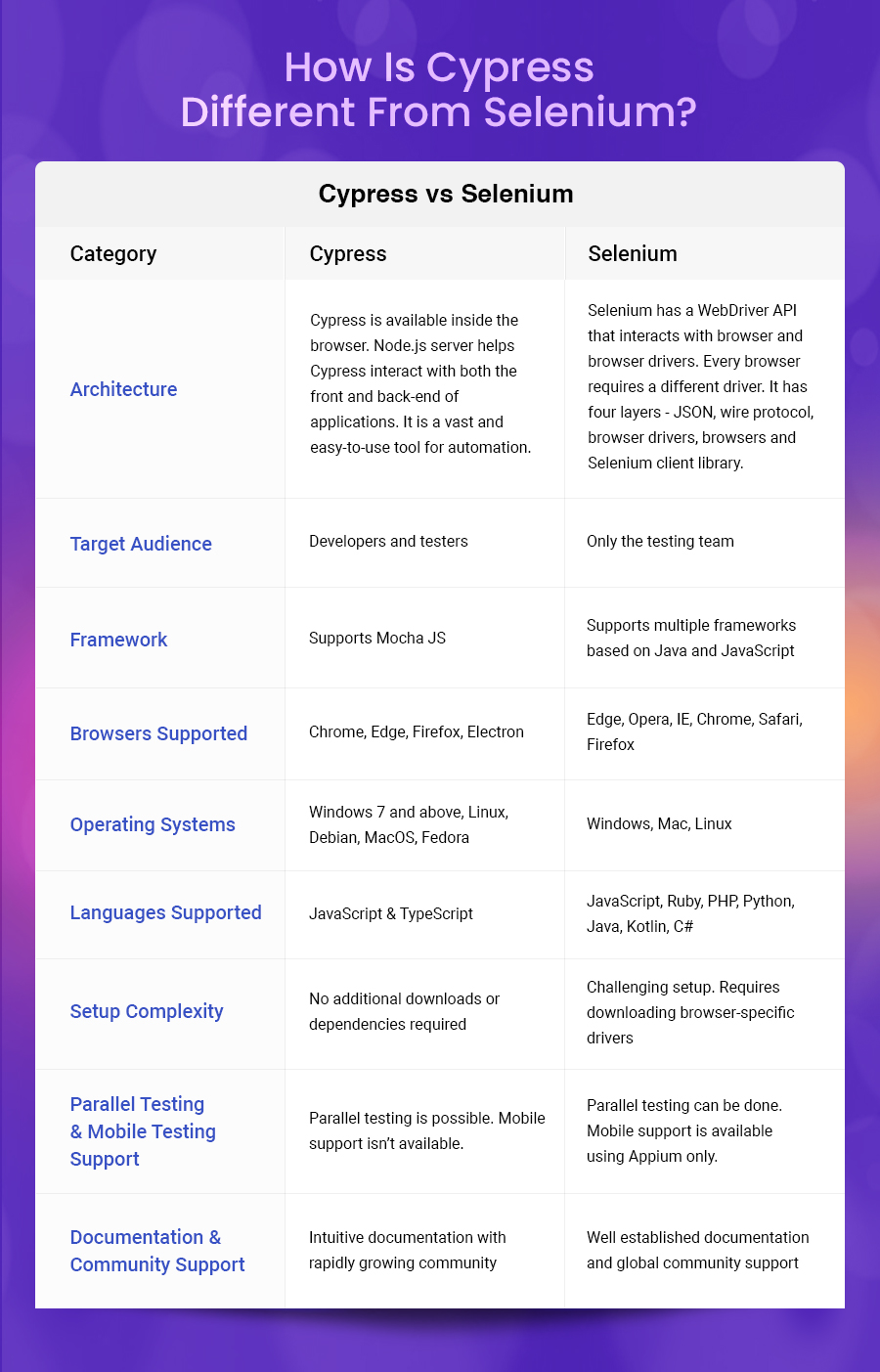 Cypress vs Selenium – Which One You Should Choose

Although Cypress and Selenium are designed to conduct automation testing, both of them are very different with regard to architecture and performance.

Cypress is ideal for introducing developers to test automation whereas Selenium is a more of a general-purpose testing tool with a very broad target audience.

The former is popular among developers trying to automate unit testing and integration testing. The latter comes across as the choice for cross-browser testing since it supports every browser.

If you want to measure the accuracy and speed of test automation, then Cypress is the winner because it is present inside the browser. Also, synchronization isn’t an issue in Cypress, unlike Selenium, which has scripts running out of the browser.

Adding to that, Cypress is growing popular in the automation testing market, whereas Selenium has already carved a niche for itself.

In a head-to-head comparison, neither of the two wins; rather, the best approach for selecting an automation tool is to weigh the pros and cons.

Review what fits the bill with your business, project requirements, skill-set, and how you can improve the test coverage of your project.

If you’d like to know more about figuring out the best testing tool for your project, please drop us a line at info@grazitti.com and we’ll take it from there.

Thanks for your request. We will get in touch with you shortly.
Need a Quote or Consultation?    Contact Us