How is Drupal 9 Better Than Drupal 8?

Drupal 9 released on June 3, 2020 which has given us a decent amount of time to understand the updates and why it’s better than Drupal 8.

Built in Drupal 8, Drupal 9 comes with extended capabilities and advanced features. It is a more advanced version of Drupal with updated third-party dependencies.

With new features and APIs being added to every new release, you might be wondering if the Drupal 8 tutorials will apply to Drupal 9, or would you have to learn an entirely new system? Let’s find out.

Drupal is an open-source content management system (CMS) with highly flexible features and advanced security standards. Drupal is most commonly used to develop fluid websites and applications. Drupal 9 was released parallelly with version 8.9, which is a Long-Term-Support (LTS) minor release of Drupal 8. It is estimated that Drupal 9 will be supported by the Drupal community by the end of 2023 with a new version 10 release in the middle of 2022.

To add further, Drupal 9 has been built by the world’s best open source community. It offers immense flexibility of usage and is the most powerful version of Drupal.

The Key Differences Between Drupal 9 and Drupal 8 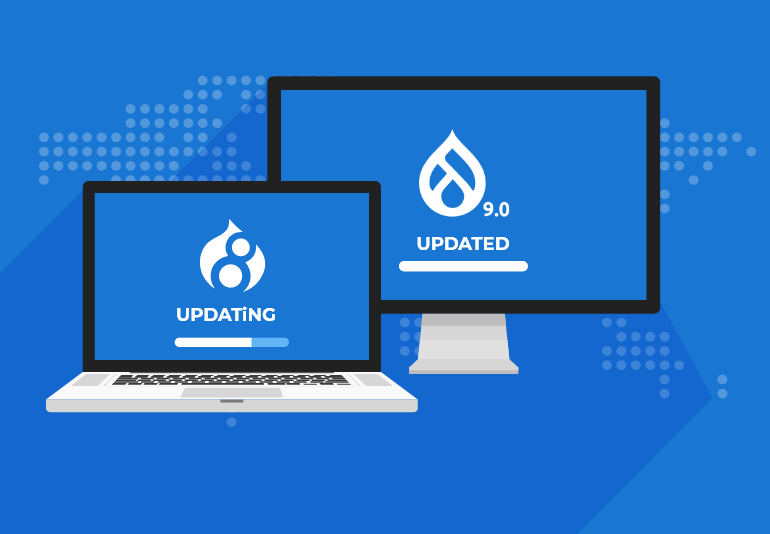 The main highlight of Drupal 9 is that it supports the latest versions of Symfony and Twig and also the creation of newer PHP libraries.

The previously released versions of Drupal witnessed the addition of many new features and APIs. You might be wondering about what new updates the new Drupal 9 version will include and what new skills you will have to learn.

The good news is that the Drupal 9 tutorial is the same as version 8 but there are certain differences as Drupal 9 is a more advanced version of Drupal. Here are the key differences:

2. The deprecated APIs have been removed from the Drupal 9 main version.

3. As compared to Drupal 8, the third-party dependencies have also been updated. The updates include the following:

The Core Features of Drupal 9

The key feature of Drupal 9 in comparison with Drupal 8 is that the former platform will be supported with security fixes. Here are the core features that it entails:

1. Drupal 9 comes with the capability of providing easy upgrades in comparison to Drupal 8.

2. Drupal 9.1, 9.2, etc, will add new backward-compatible features to Drupal 9 every six months after 9.0. This feature is similar to the one supported by Drupal 8.

3. Drupal 9 supports cleaned up and consistent APIs that render a modern environment for developers to work. The highlight is that developers with Drupal 8 experience will find Drupal 9 relatively familiar.

The installation process for Drupal 9 is the same as that of Drupal 8. The only difference is that it requires a 7.3 or 7.4 PHP version for installation. Here is a detailed walk-through for installing Drupal 9. 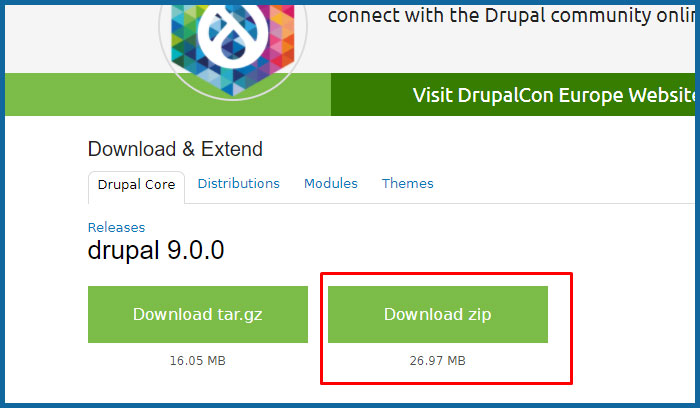 Step 2. Extract the file and save it under: xampp→htdocs. After applying this, save it and rename it.

b. Select the installation profile 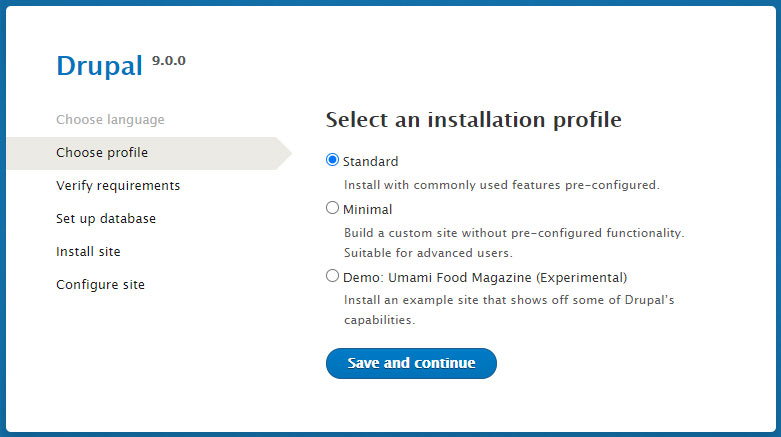 c. It will display the preview of requirements for installing Drupal
d. The next step is to configure the database 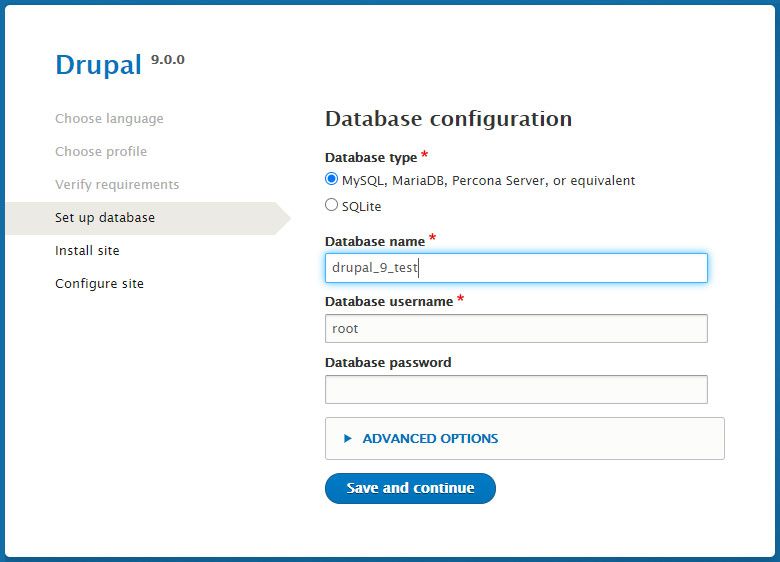 Fill all the required fields. Click on Save and Continue. 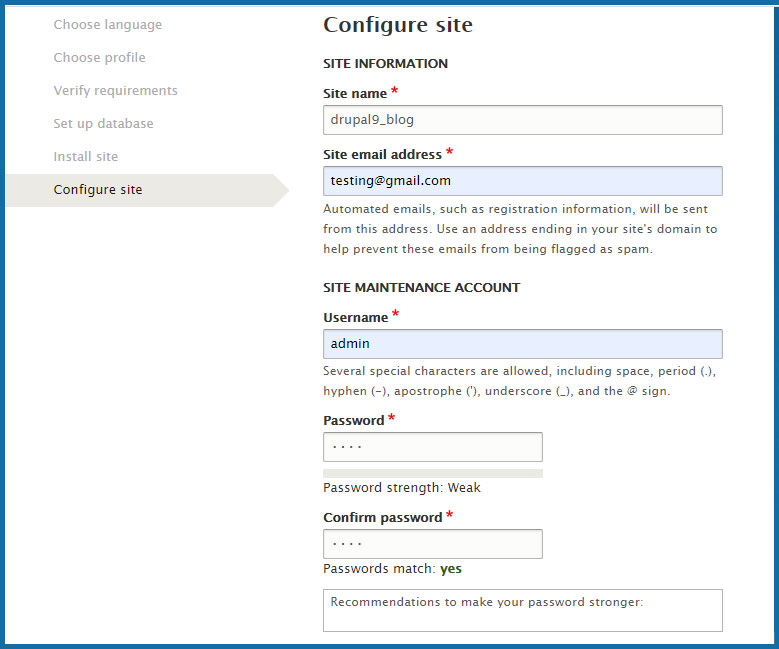 It is essential to create and set up an administrator’s account. The credentials will provide you access to the website’s back-end. 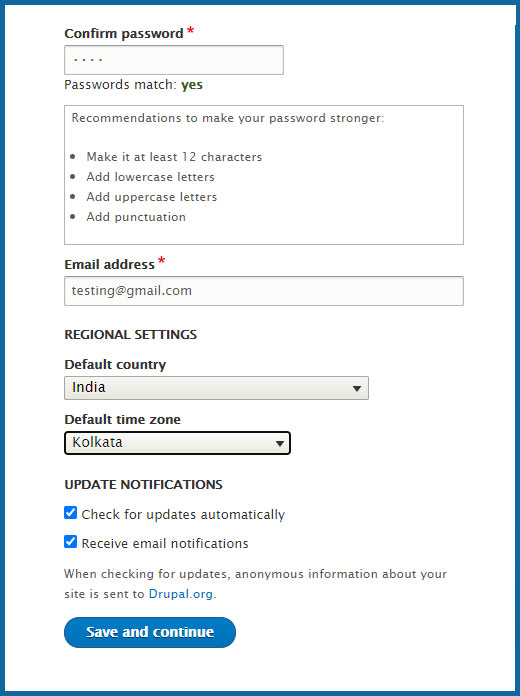 In the final step, choose the country and time zone for your website. Select whether you want to receive any email notifications for new and latest updates or not. Click on the “Save and Continue” button to install Drupal 9.

The manual installation of Drupal 9 will be successfully complete after performing all the aforementioned steps.

How Can We Say That Drupal 9 is Built In Drupal 8?

Let’s take a look at the four main processes that drive innovation in Drupal:

2. Backward Compatibility: Backward compatibility means that Drupal 9 is compatible with Drupal 8. This implies that version 9 will be able to use version 8’s modules, configurations, etc. These added functionalities do not affect Drupal 9’s overall performance. As a result, Drupal remains clean, fast, up-to-date, and clutter-free. Since the Drupal community has emphasized majorly on breaking the code, the data remains intact.

3. Scheduled Releases: The community can get predictable and new features can be added every six months.

4. Depreciation Process: Drupal 9 came with a major change that supports the lifting of deprecated codes in Drupal 8. Code marked as “deprecated” does not provide any further support or perform any function. In this process, the deprecated APIs can be removed and third-party dependencies can also be upgraded. Drupal 9 comes with better alternatives that can be replaced in Drupal 8 with code depreciation.

The reason we say that Drupal 9 has been built in Drupal 8 is that it does not come with any new features. It supports all updates features of Drupal 8.9. However, Drupal 9 releases will continue to possess updated backward-compatible features scheduled to be released after every six months.

Conclusion
Drupal 9 will reinvent the way developers handle releases. The objective of rolling out this update is to offer a seamless environment that can be effectively achieved with integrated backward-compatibility. If you are up-to-date with Drupal 8’s latest minor versions, then upgrading to Drupal 9 will be smooth sailing for you.

Wish to know more about Drupal 9? Talk to us!

Team Grazitti is committed to offering you with the best IT services as and when required. To know more about our services, drop us a line at info@grazitti.com, and we’ll take it from there. 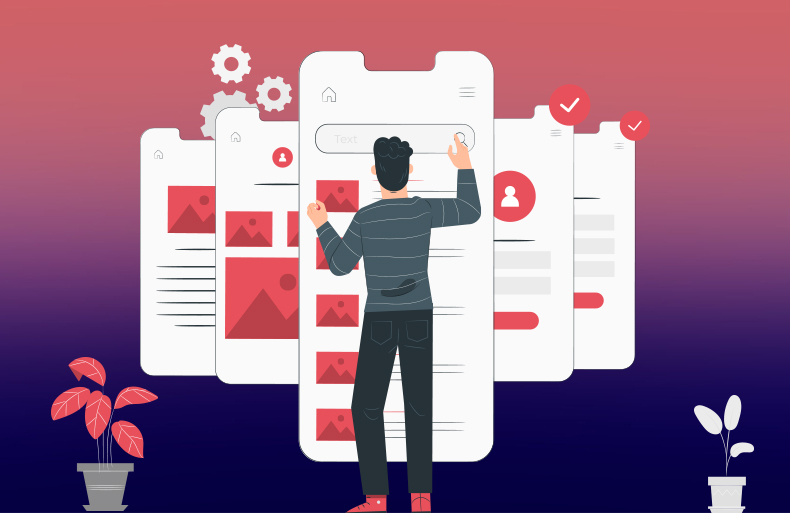 Top 7 Tips to Build a Great UX for PWA 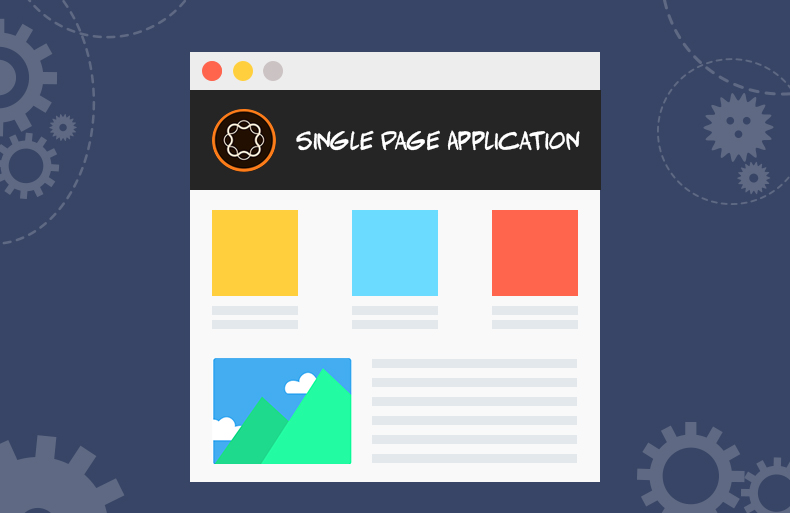 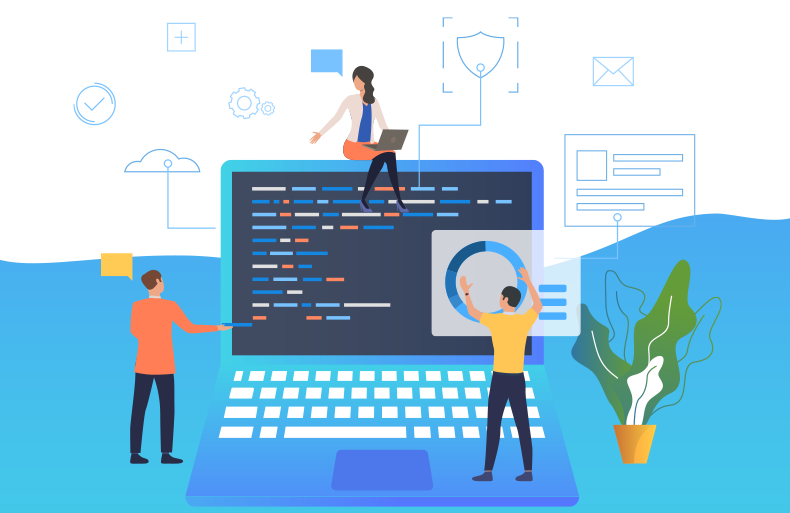