In this second post of our series, we look at the various popular domains being touched upon by the increasing number of mobile applications.

Let us start by looking at how consumers are using their mobile phones in US, Europe and Japan. 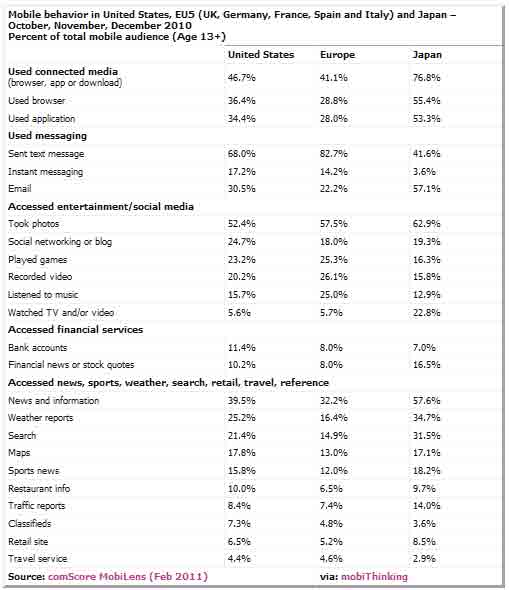 Between 2008-2010, 300,000 mobile applications were developed. In 2010 these 300,000+ applications were downloaded 10.9 billion times. IDC1 predicts that global downloads will reach 183 billion7 in 2015 and will be worth more than US$35 billion.
A mobile application is a software application that runs in a smartphone, tablet or other portable device.
These are provided by developers by submitting them to app stores, who then retail them online to the consumers.

There is also an increasing trend of free third party cross platform app stores which cater to both smartphones and feature phones. The largest amongst these is Get Jar with over 350,000 apps and over 2 Billion downloads. Others are Cydia, Handster, Amazon Appstore for Android, and Handango.

In India we have seen a few players open their application stores. For its 145 million subscribers, Vodafone India on 1st November, 2011 launched an app store named – Vstore9. It has a collection of over 10,000 free and paid apps for four major mobile operating systems namely Android, Java,Symbian and BlackBerry.

Apart from these, there are other development companies with plans to open App stores of their own. Witness appBazar by Pune based Webonise Labs12,13.

To get an idea of the present mobile app market, we note that in 2012, the market is estimated to be US$ 17.5 Billion14 according to a study commissioned by Get Jar. The best app development companies15 in this marketplace according to SourcingLine15 are: Intersog (USA, Chicago), CDN Solutions Group (India, Indore), Dot Com Infoway (India, Chennai) amongst others.

In the US, according to Nielsen2 (June 2010), the most used (as opposed to downloaded) apps across all smartphones, are Facebook, Google Maps and The Weather Channel (TWC). The most popular categories are games; news; maps; social networking and music.We expect the categories to remain similar at the time of this writing also.

The Facebook App has been downloaded 100 million times from the independent app store GetJar, according to GetJar2 (December 2010) (making this the most downloaded app from any app store). The irony is that this is not a download app it’s a short cut to the Facebook mobile site – Facebook is a Web app, available for anyone with any Web-enabled handset.

Demand for app stores is expected to peak in 2013. ABI Research (May 2010) predicts that app stores will slowly decline as subscribers migrate from download apps to mobile Web sites and more popular download apps, such as social networking, are preloaded on mobile devices.

Between Apple and Google, Google has recently overtaken Apple in the number of apps downloaded3. With a 44% share vs Apple’s 31%, Android users are now downloading more mobile programs than iPhone and iPad users combined. This is despite the Android Market only having 319,161 apps at the end of last month3 vs. the Apple App Store’s 459,589. Reason being that Android phones sell twice as much as Apple, hence more downloads.
By the end of 2011, Android market will have as many users as Apple’s App store, as shown in the following graphic, further strengthening the Android platform. 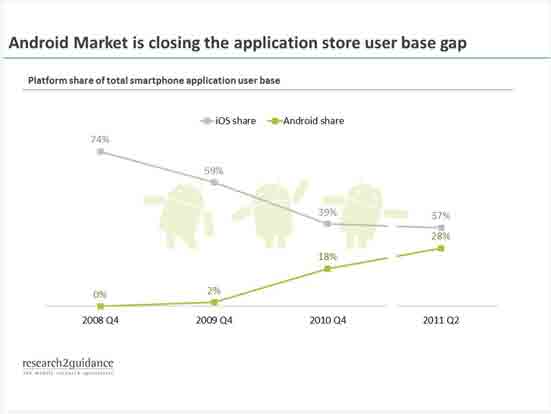 For now, let us have a look at some of the best paid and free apps available for various domains as offered from Apple4:
For the iPhone
All-Time Top Paid iPhone Apps

Accounting for nine out of the top 10, video games dominate the paid apps market, while the most popular free apps are more diverse.
For the iPad
All-Time Top Paid iPad Apps

Some other domains and apps5 popular in them are:

This 2nd post, concludes our two intial posts, on introducing mobile applications to the reader. In our future posts, we shall evaluate how to test such applications. 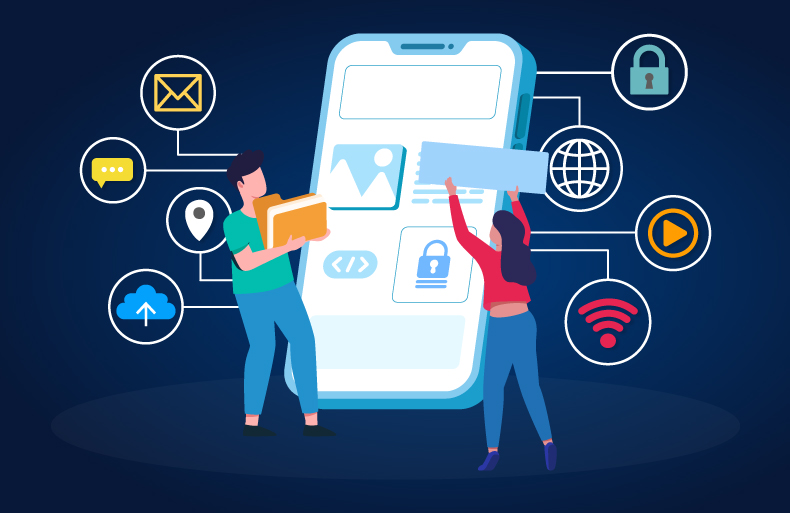 Top 6 Mobile App Development Trends You Should Know About 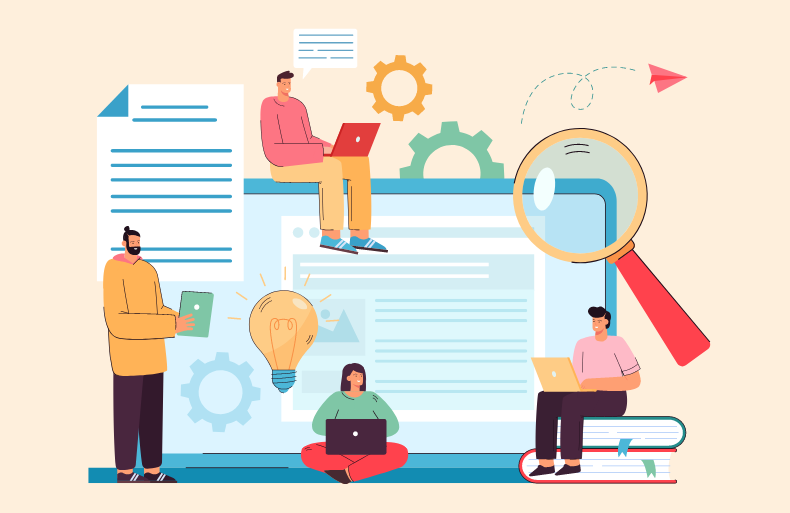 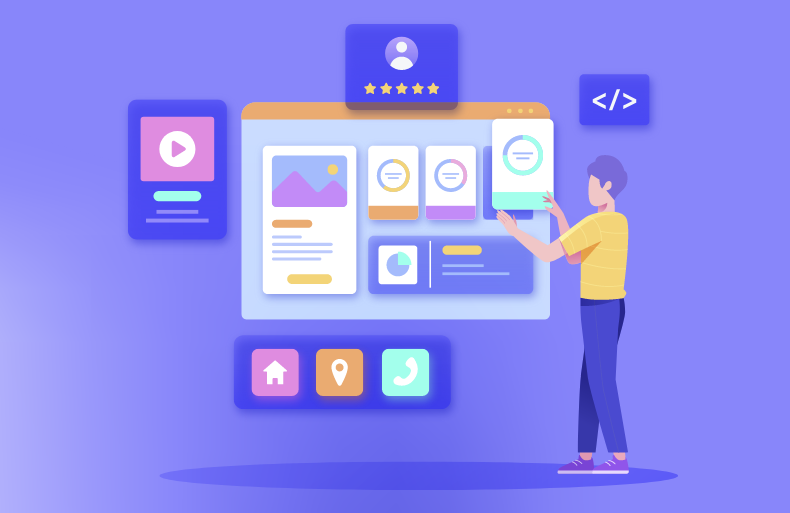